These Blog Items Are Also Available At
AustinBusinessLawyer.info

This Law Blog is a business law and tax law blog published by the business, tax, and health care lawyers at AttorneyBritt.

Our law blog presents commentary and information regarding the laws and regulations applicable to individuals, corporations, partnerships, and limited liability companies (LLCs); as they relate to the myriad of business transactions, contracts, and agreements every business owner, shareholder, member, physician, and/or health care provider must consider.

Ahmed Arbery, was a man killed by two residents of a subdivision in a South Georgia community. The focus of this comment is strictly limited to the defendants’ claims that they were trying to make a citizen's arrest of Ahmed Arbery when Mr. Arbery was killed.

I don't know and for purposes of this comment find it irrelevant whether Mr. Arbery was or wasn't a burglar who had committed felony burglaries in that neighborhood in the past.  Further, for purposes of this comment I don't know and don't find it relevant to the subject matter of this comment whether the Defendants are racists looking to get the black guy jogger.  My comment is strictly limited to whether a defense claim of citizen's arrest can apply to this situation.  As you will see, I think the answer is an emphatic NO !

Under Georgia Law at the time of this incident, a citizen's arrest applicable to the facts of this matter was only allowed for felonies committed "in the presence" of the person making the arrest or  committed "within the immediate Knowledge" of the person making the arrest.  In the Arbery case the Defendants never witnessed Mr. Arbery committing a felony in their presence.  Further while they suspected, rightly or wrongly, Mr. Arbery of having committed crimes in the neighborhood in the past, these suspicions just don't qualify as "immediate Knowledge" as defined in the Georgia statute.

Immediate knowledge in the Georgia statute was intended to cover situations such a woman walking down the sidewalk when a purse snatcher grabs her purse and she yells out "Stop that man!  He just stole my purse." and hearing that cry and seeing the robber running away another person stops them and detains them for the police.  Immediate Knowledge means immediately after the point in time that the felony is committed.  It does not mean knowledge learned from watching a video tape days or weeks after the evens in question occurred.  Finally, the citizen's arrest statute does NOT and Never has authorized a citizen to act days and weeks after an incident to enable such citizens to pursue a suspect, detain that suspect, and question that suspect.  That is clearly the job of Police. 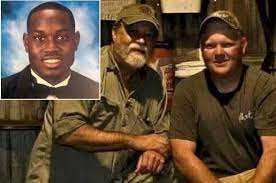 Yet in the Arbery case the Defendants are trying to argue that since the Defendants believed or had a suspicion that Mr. Arbery may have committed a felony which the Defendants did not witness in their “immediate presence” and of which they did NOT have "immediate Knowledge" that they decided to pursue Mr. Arbery, detain him, and question him.  So, while the Defendants may not be guilty of intentional murder of Mr. Arbery, it seems to me they had a legally improper intent which led to Mr. Arbery's death.  I just don't see how the Defendants escape a guilty verdict on either involuntary or voluntary manslaughter (Sometimes called 2nd Degree or 3rd Degree murder in some States).

WASHINGTON (Reuters) - Senior Democrats in Congress have agreed to raise their proposed tax reporting threshold for bank account inflows and outflows to $10,000 a year, with exemptions for wage income, from an earlier proposal of $600 that drew criticism for being too intrusive.

(NOTE:  Since this is NOT $10,000 per transaction.  It is a law requiring banks to report accounts and account detailed information to the IRS for any account that has more than $10,000 in deposits or withdrawals in total during the calendar year.  This will mean every person who has any kind of small business income will be subject to a warrantless search by the IRS of their banking records.  It is a direct attack on the entire lower and middle class in this country.  It is NOT as the democrats claim aimed at billionaires.  If this were aimed at Billionaires the threshold would need to be more than $100,000,000 dollars per year.)

U.S. Senate Finance Committee Chairman Ron Wyden on Tuesday said the new $10,000 Internal Revenue Service reporting threshold, to be included in Democrats' sweeping "reconciliation" social spending and tax hike legislation, was chosen after consultations with the U.S. Treasury because it is a level frequently used in other bank reporting requirements.

(NOTE:  Here they deliberately try to confuse the reader into thinking this new law would be about reporting TRANSACTIONS of $10,000 or more.  And that is just a lie by both democrat Senator Ron Wyden AND the news media making uncritical reports of this lie.  This law says report bank accounts that have more than $10,000 in deposits or withdrawals IN TOTAL during the calendar year!!!)

These include requirements for banks to report daily aggregate cash transactions of $10,000 or more under anti-money laundering rules.

Democrats' initial proposal for banks to report inflows or outflows of bank accounts of more than $600 annually drew sharp criticism from Republicans for targeting tiny transactions and opposition from banking and other lobbying groups who charged it would raise financial privacy concerns.

The proposal does not identify individual transactions, but gross annual inflows or outflows to help the IRS identify where wealthy taxpayers who do not rely on regular "W2" wage income may be hiding opaque source of business or investment income.

(NOTE:  The democrats and the media think wealth taxpayers are taxpayers who deposit more than or withdraw more than $10,000 in total during an entire calendar year.  That is BS of course.)

Wyden and Senator Elizabeth Warren said the revised proposal would exclude W2 wage income from the inflows and outflows data reporting requirement. Many Americans have their paychecks automatically deposited into their bank accounts.

Wyden said the revised proposal would potentially raise "hundreds of billions of dollars" by catching tax evaders, but declined to provide a specific estimate.

"This is about wealthy business owners at the tippy top of the top. That's where the unpaid taxes are," he told reporters on a conference call.

U.S. Treasury Secretary Janet Yellen on Tuesday endorsed the proposal, saying it would make it harder for wealthy Americans to hide sources of income from taxation, allowing the IRS to target them for audits.

The Treasury estimates that the cost of tax evasion among the top 1% of taxpayers exceeds $160 billion annually, part of a "tax gap" between taxes owed and those collected estimated at more than $7 trillion over a decade.

"Today's new proposal reflects the Administration's strong belief that we should zero in on those at the top of the income scale who don't pay the taxes they owe, while protecting American workers by setting the bank account threshold at $10,000 and providing an exemption for wage earners like teachers and firefighters," Yellen said in a statement.

In a new statement on tax compliance proposals, the Treasury said financial accounts with money flowing in and out that totals less than $10,000 annually are not subject to any additional reporting.

"Further, when computing this threshold, the new, tailored proposal carves out wage and salary earners and federal program beneficiaries, such that only those accruing other forms of income in opaque ways are a part of the reporting regime," the Treasury said.

The department also said that financial services firms could report the total aggregate inflows and outflows from accounts rounded to the nearest $1,000 to further protect data privacy.


Required Disclaimer: Not Certified by the Texas Board of Legal Specialization.